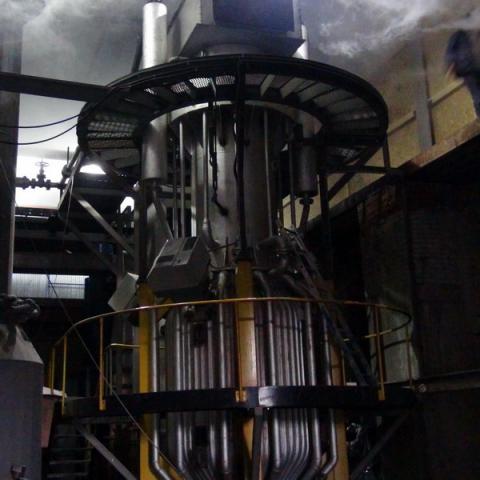 The steam and gas generator of type К-6-350КТ is intended for burning of a coal dust for the purpose of maintenance of a drive of the electrogenerator перегретым by steam c pressure 2,4MPa. It represents a steam copper with the two-planimetric combined circulation of the steam-and-water environment. A design of surfaces of heating vodo-gazotrubnaja. The steam and gas generator auxiliary тягодутьевым is completed by the equipment and gas purification system.

As a protecting surface of a copper external isolation and the metal casing, providing temperature of an external wall in standard limits 450С is provided.

On an exit from the top internal chamber it is established vertical gas-turbine a boiler bunch from pipes in which steam formation process comes to an end. The bunch is included in an independent contour of natural circulation with use draw-through pipes and portable separators of steam. Contour feed goes from system of screen pipes, reserve feed is provided from the second line RPK.

Let's note advantages of use of copper К-6.

1. It is not required water treatment. At use of the standard, standard horizontal coppers on the organisation water treatment it is necessary to 30 % of cost of a boiler-house or thermal power station. Because of practical impossibility constantly to observe ideal quality of network water, especially in open systems. For this reason there is a regular burn-out or sagging main heat-tolerant copper pipes. Hence, for long operation of horizontal coppers the obligatory two-planimetric scheme or ideal system water treatment is required.
2. Not possibility of an overheat of a copper. Level of a working body, water, in a vertical copper always considerably above a zone of the maximum temperature pressure of a copper.
3. Vertical configuration allows to provide natural circulation of the worker a theme in a copper. It cannot be made in a horizontal copper without application of additional circulating pumps.
4. The heat transfer area. The area of a heat transfer of a vertical copper in 3 - 4 times exceeds the similar area in a horizontal copper. For example, 4 МВт the vertical copper has a total area of heat exchange of 160 m sq. Whereas a similar horizontal copper no more than 40 m sq. because of complexity of technical realisation of uniformity heat exchanging processes. Hence the temperature of smoke gases on an exit in a vertical copper much more low, than in horizontal that gives economic efficiency in fuel use. From here and absence of necessity to establish expensive systems the smoke exhaustor equipment.
5. The top internal chamber. In a copper functionally independent water trumpet vortical top internal chamber is established. Top internal pressure reaches 6 MVt/m ³, форсировка cross-section section makes 14MW/m ³. heat loss do not exceed 1.3 %. It is almost unattainable in a horizontal copper.
6. Management of capacity. In the given copper linear administration of capacity from 20 % to the forced capacity in 140 % from the established is exercised. In a horizontal copper it is impossible to make it, without breaking an optimum mode of its functioning.
7. Reliability. The copper made, even from St20 allows to function without service of 15 000 hours. At use of heat resisting steels 23Х23Н10Т, 18Х23Н10Т the guaranteed working capacity of 80 000 hours. That is impossible in standard horizontal coppers. Service consists in periodic washing or purges top жаротрубного a bunch.
8. The occupied space. The copper capacity to 6 Mvt occupies the space 3000mm х 3000 mm. The similar horizontal copper occupies the space of 3000 mm х 7000 mm.